Dussera (Dassera) is one of the significant Hindu festivals, celebrated with much joy in the entire country. The occasion marks the occasion of Lord Rama and brother Lakshman approaching Mother Durga to ask her for her blessings in His planned attack on the demon Ravana. It is therefore considered that the Supreme Personality of Godhead’s approaching her for blessings to remove material impediments to His spiritual goals should be the approach of the humble devotee of the Lord to clinche the important triumph of Lord Rama over the demon king, Ravana, the victory of good over evil.
Brilliantly decorated tableaux and processions depicting various facets of Rama’s life are taken out. On the tenth day, the Vijayadasmi day, the colossal effigies of Ravana, his brother Kumbhkarna and son Meghnath are placed in vast open spaces. Rama, accompanied by his consort Sita and his brother Lakshman, arrive and shoot arrows of fire at these effigies, which are stuffed with explosive material. The result is a deafening blast, enhanced by the shouts of merriment and triumph from the spectators.

It is significant that the Lord invoked the blessings of the divine mother, Goddess Durga, before actually going out to battle. In burning the effigies of the demon Ravan who was slain by Lord Rama it is also symbolic for us that we, the people are asked to burn the evil within them, and thus follow the path of virtue and goodness, bearing in mind the instance of Ravana, who despite all his might and majesty was destroyed for his evil ways.
It must be remembered that Ravana was a great scholar and an ardent devotee of Lord Shiva, but the very powers that were bestowed on him for his steadfast devotion proved to be his undoing, due to his gross misuse of the same. Furthermore although empowered by his austerities performed to Lord Shiva, his powers were ineffective over the powers of Rama. 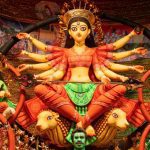