“This year, Janmastami Goes Digital,” reads the massive billboard that can now be seen all over Mumbai.

The billboards are advertising “Krishna Fest,” presented by ISKCON Chowpatty and Govardhan Eco-Village from August 22nd to 31st. The ten-day event is an ingenious way of celebrating a massive Janmastami festival with thousands of people during the pandemic – a virtual experience that mimics the in-person one. 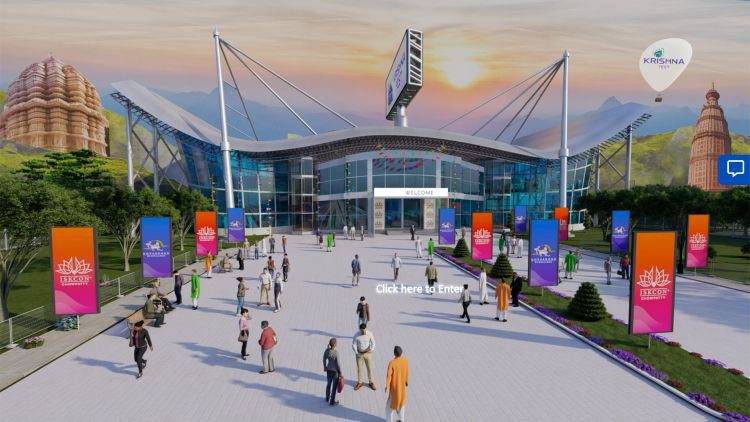 Among the team who developed and organized the Fest are Govardhan Eco-Village Director Gauranga Das; Sankirtan Das and Braj Mohan Das, brahmacharis at ISKCON Chowpatty; and Rohit Sobti, former brand manager for Yash Raj films. Many congregational devotees also threw their time and effort into the project, helping from their laptops at home and using skills they had taught themselves during long lockdown hours over the past year.

“As it was the 125th birth anniversary of Srila Prabhupada, we wanted to do something unique for making people aware of Krishna consciousness as an offering to Prabhupada,” Braj Mohan says.

Visitors who register at Krishnafest.in find themselves looking at a wide, tree-lined walkway created with 3D graphics, with ISKCON Chowpatty temple on one side and GEV’s Sri Sri Radha Madan Mohan temple on the other. After entering the convention center between the two, guests find themselves in a 3D outdoor lobby, with Govardhan Hill, the Yamuna river, cows and peacocks in the background. In the foreground is a temple courtyard, with devotees milling about, a Mandir marked “darshan,” a Srila Prabhupada murti, an ornate auditorium building, a bazaar, and an “E-Hundi” donation box. 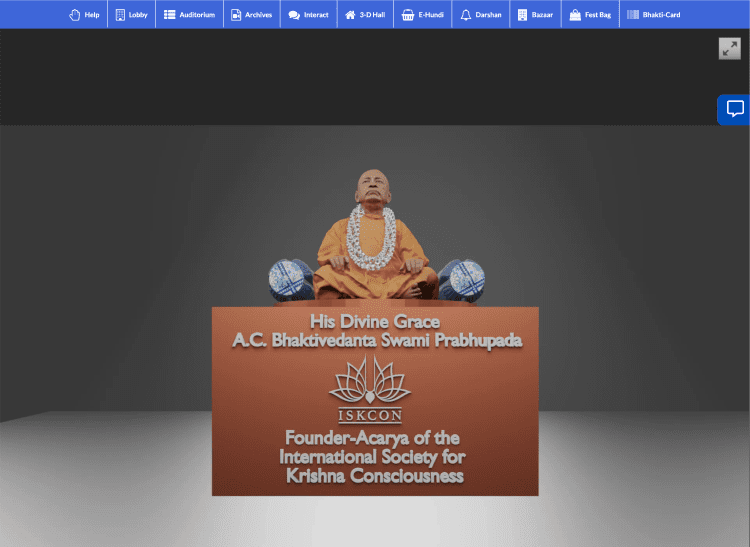 Clicking on “darshan” leads one to photos of Sri Sri Radha Gopinath at ISKCON Chowpatty and Sri Sri Radha Vrindavan Bihari at GEV. Clicking on the Prabhupada murti leads one into a Srila Prabhupada 3D Hall, where one can virtually circumambulate a 3D model of Prabhupada’s murti that took some 200,000 combined photos to create, and learn about his life and contributions.

Meanwhile in the Bazaar are a variety of booths including Goshala, Rural Development, Youth Services, Hare Krishna Books and more. Clicking on a stall brings one down into a street level view of the stall; one can then watch videos about the project, download PDFs to your “Fest Bag,” and even video chat with the owner or other visitors, as you would at an in-person festival.

At the Questions and Answers booth, one can ask questions live through the interface; while at the book and prasadam stalls, people can order items that will be delivered to their home.

As visitors are browsing stalls, a pop-up will tell them if a talk or show is starting in the auditorium so they won’t miss it. The schedule in the auditorium is packed from 7:00am till midday, and from 5:00 to 10:00pm. Presentations are catered to three audience categories: devotees, those who are familiar with ISKCON, and complete newcomers. 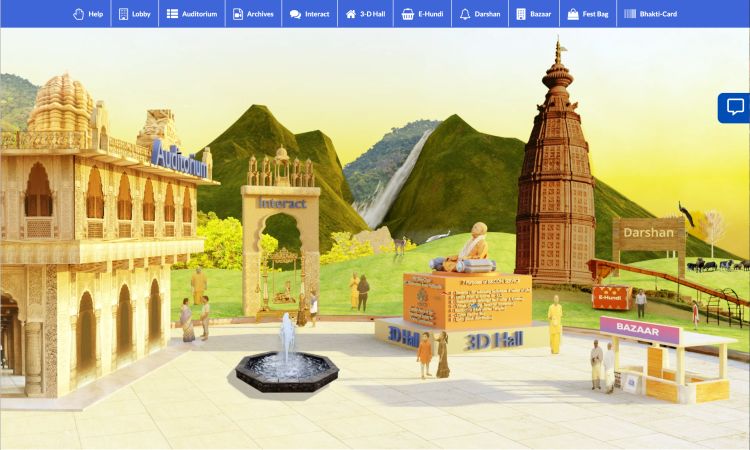 In the morning is a “Transform Your Japa” retreat with Mahatma Das. Later, talks on Krishna’s pastimes are given by devotees including Giriraj Swami, Bhakti Purushottama Swami, Bhakti Chaitanya Swami, Radhanath Swami, Sachinandana Swami, and more. There are also workshops on Parenting the Ayurveda way, the Art of Friendships, Coping with Suffering, Building Startups Using Gita Principles, Unclutter – a Q & A series on Life and Spirituality, and much more.

Entertainment includes the BE YOU talent showcase where kids and youth demonstrate their talents from their homes around India and the world. There are also short films on the themes of spirituality, sustainability, social impact and self-development submitted for the Fest’s film contest. And there are kirtans and dramas shot at home or with small groups on location outdoors at Govardhan Ecovillage, with Covid safety protocols in place.

“The dramas have been very thoughtfully and professionally done by devotees from ISKCON Chowpatty,” explains Braja Mohan Das. “One drama is a tribute to His Holiness Bhakti Charu Swami, while another shows Krishna’s birth as if reported by a news channel, with green screens and graphics used to make the viewer feel like they are actually in Vrindavan.” 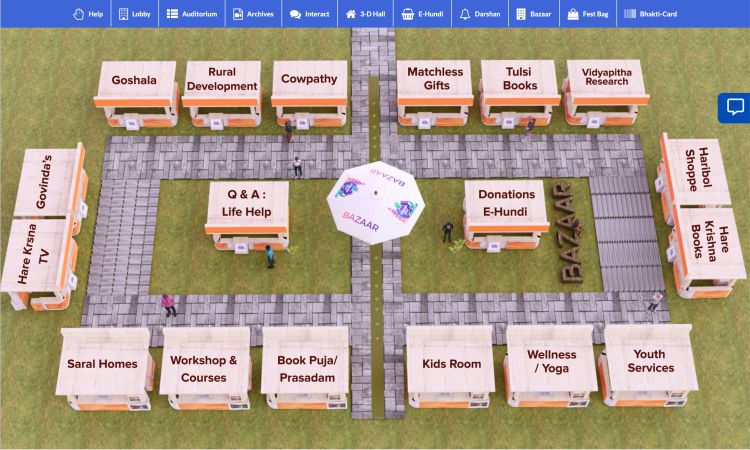 Presentations and talks, which are offered in English, Hindi and Marathi, are pre-recorded. However, each speaker is available after their talk to respond to questions in chat or in a video call with attendees. Attendees can also video chat amongst themselves.

Finally, the Bhakti Card system awards visitors points for activities such as watching a talk or visiting a booth in the Bazaar. The top 125 engagers who accumulate the highest number of Bhakti Points will receive gifts such as a three-night stay at Govardhana Eco Village, gift tokens for Govinda’s, and spiritual home décor.

Besides this, the digital platform, unlike in-person festivals, lets organizers know how long people stayed, what lectures they listened to, etc, ensuring better follow-up. So far, more than 13,000 people have registered for the event, with 3,000 unique visitors on the first day.

“People have messaged us saying that they’re really awed by the experience – it’s created a buzz here in India,” Braj Mohan says. “Krishna Fest doesn’t replace physical temples or physical association, but the customized virtual platform, with its possibilities of one-on-one or group interactions, allows visitors to do many of the things we usually do when attending a festival in person. Just as Bhaktisiddhanta Saraswati Thakur once hired a ship to display dioramas, creating excitement around the unique presentation so that more people would be attracted, so in the same way, we are using the latest modern technology to interact with people, create a word-of-mouth buzz, and attract more people to the Krishna consciousness movement.”