The festival of Makar Sankranti 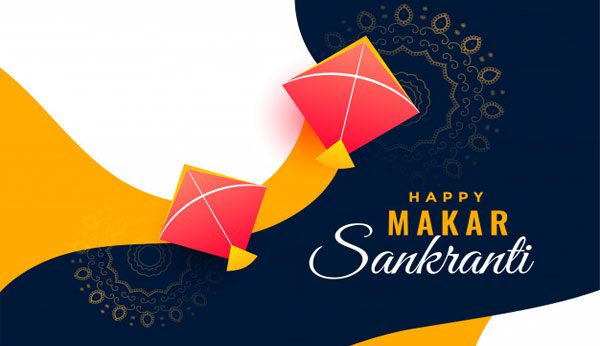 The auspicious day of Makar Sankranti, which falls in the Krishna paksha of Magha maas (month of January), is considered a very auspicious day, and marks the entering of the sun into the sign of Capricorn or ‘Makar’.

Lord Surya on His dazzling chariot, that has thousands of spokes and magnificent wheels, and is driven by seven horses (seven colours of the spectrum) begins His journey northward into the Makara Rasi on this day, filling our lives with light and getting rid of the darkness.  This light not only fills our material life and helps our plants grow at seeding time, but also gets rid of our “internal” darkness, showing the path of self-realisation.

The Brahma-Sutras proclaim that the time of death is immaterial in the case of a devotee. It is established that although one who has knowledge of the Lord can die during any time; the exaltations of uttarayana are to praise meditation on the path to Vaikuntha, which the wise devotee takes upon death. This divine path beginning with light, is presided upon by deities of greater and greater brilliance, with uttarayana being one of them. This marga (path) culminates in Vaikuntha, the state of moksha, and shastra says it should be meditated upon daily by the yogi of devotion. Although in ancient times all Sankrantis were observed and celebrated, Makar Sankranti is of special importance, as it marks the beginning of the auspicious six month period of Uttarayan.

Past events on Makar Sankranti

a. Bhishma Dev leaves his body: After the war on the battlefield of Kurukshetra, when Bhishma Dev was lying on a bed of arrows and was about to leave his body, at that time he was waiting for the sun to enter into Uttarayan, as it is considered to be an auspicious time, and he left his body on the auspicious day of Makar Sankranti while beholding the beautiful face of Lord Krishna in the holy place of Kurukshetra, which is also known as Dharmakshetra. The uttarayana (norther course of the Sun) was traditionally considered more auspicious than the Dakshin Ayana (southern course of the Sun).

b. Descent of Mother Ganges: This glorious day also marks the descent of mother Ganges on this earthly planet, after the austere penances performed by King Bhageerath with the aspiration to free his ancestors from the curse of Kapila rishi, who, at being falsely accused by the sixty thousand sons of King Sagar for stealing the sacrificial horse actually stolen by indra, cursed them to go to the Nether regions. After being pacified by their prayers, he proclaimed that the only way for their salvation would be if the river Ganges would descend from the heavenly planets and come down to the earth and up to the nether regions, then by being purified by her they shall be freed from the curse. After the austere penances of King Bhageerath, the most purifying Mother Ganges came down to the earth on the day of Maker Sankranti. This descent of hers is celebrated till today in the form of Ganga Sagar Mela, when numerous pilgrims go to the Sagar islands in West Bengal and bathe in the holy confluence of the Ganga with the ocean.

c. Acceptance of Sannyasa by Shri Chaitanya Mahaprabhu: Another significant event that took place on this day was the acceptance of the Sannyas order of life by Shri Chaitanya Mahaprabhu for the purpose of preaching and propagating the path of devotional service and delivering all the fallen conditioned souls in this age of Kali. It was on this day that He left behind His widowed mother and young wife in Mayapur, and in the village of Katwa He renounced His Grhastha ashram and accepted Sannyasa from Shri Keshava Bharati, shaving His beautiful locks of hair and donning saffron cloths. Although, being the Supreme Personality of Godhead, one of His opulence is that He is the most renounced and therefore there was no need for Him to accept the renounced order of Sannyas, yet seeing the fault-finding nature of the people and understanding that if He would accept the life of a renunciant then the general populace would be able to give Him the proper respect and refrain from committing offences at His lotus feet, He decided to take sannyasa. Thereafter He inundated the entire universe with Krishna Bhakti and it is due to His causeless mercy alone that we are able to today tread the path of devotion following in the footsteps of his devotees.

Celebrations on the day of Makara Sankranti (Local Traditions)

a. Special Dishes: On this day, devotees prepare a dish made of green grams, rice and jaggery (sarkkarai pongal) – representing Lord Narayana, Laxmi and Their Divine love. The festival reminds us that we need to establish that Divine Love within ourselves and give a direction to this “chanchala buddhi” and fix it our Lord Narayana, who brings light in our lives. Sesame oil is used in making sweets and dishes, particularly on this day. It is believed that sesame seeds are used for purificatory purposed (or as being auspicious – “tila juhomi sarasaagum sapishhthaam gandhaara mama chitteramanutu swaaha”, “tila krishnaa tila shevataa tila saumyaa vashaanugaa”…).

So generally special offerings of til (sesame) rice and corn (first harvest) are offered and distributed. Especially preparations of rice Khitcheri with sesame and corn are a preferred offering to the Lord on this day. In different parts of India slight variations (gauna – local traditions prevail) but the general observance is very much the same. Some devotees also have elaborate festivals offering six kinds of sesame preparation in the service of the Lord on Sat-tila ekadasi.

b. Celebration of the new harvest: This same festival is celebrated as Pongal in the South of India.  Harvest is brought home, the new rice is then boiled in milk to make the sweet called “chakrapongali”, the special cuisine of the eve. This harvest festival is celebrated for 3 days. The delicacy is first offered to Sun God, the chief deity under worship, that is later distributed to all as prasadam. The harvest is celebrated as being blessed with Dhanyalakshmi and a splendid feast is shared by all after the Ishta Devatha pujas.

c. Flying Kites – kites are seen soaring high in the sky on the day of Makara Sankranti. This is symbolic of the existence of mankind, with the kites depicting the human lives and the manza depicting the eternal bond between us and the divine self. People however seem to correlate the soaring kites with their high spirits on the eve of Makara sankranti. Competitions held with kites of all sizes and shapes and the sharp edged manza draw people on the terraces and in open grounds to witness the riot of colours – fun for the gurukulis.

d. Gobbemmalu – Young girls are seen to put up Gobbemmalu, round balls of cow dung that are decorated with vermilion, turmeric and coloured flowers. These are placed in the middle of the bright muggus in the front yards of the dwellings and are worshipped with Navadhanyas (nine types of grains) to welcome the Lakshmi, the Goddess of abundance and prosperity. Spinsters worship for good husbands on the occasion. After this, the women folk get gathered to sing and dance to the accompaniment around these gobbis.

e. Other celebations: Many traditional folk forms add glory to the festive scenario. Haridasulu (Madhwa Devotees) are seen singing eulogies of the Almighty and seeking arms from the people in the early hours of the days. Gangireddu Ata, is another festival where trained oxen dance to the tunes of the Nagaswaram played by their master is a great attraction. Kommudasarulu & PittalaDora are other folklore that brighten the days with their healthy humour. 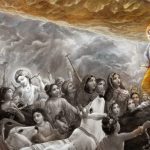 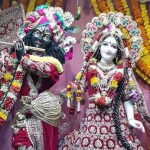