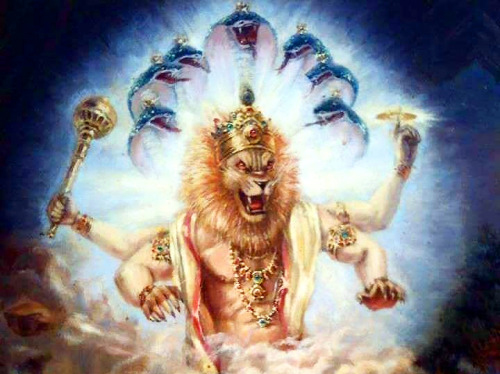 Lord Narasimha holds a special place among Vaishnavas, or devotees of Lord Vishnu or Krishna. He is known as the divine protector because he removes all obstacles that can hamper a devotee’s spiritual progress.

The form of Lord Narasimha is unique. As the name suggests, his form is a combination of lion and human — face of a lion and body of a man. People who are unfamiliar with Vedic characters foolishly conclude that such characters are imaginary and mere creations of human mind. “It’s all blind faith and superstitious,” they argue and reject such ideas as false. But we must remember that the universe is unlimited, and we have no idea of what kind of varied beings exist outside our planet earth. Therefore, rejecting such ideas as false just because we have no direct experience of such a phenomenon is equally blind and superstitious.

Srila Prabhupada used to compare such blind non-believers with a frog in the well. He writes, “A frog residing in the atmosphere and boundary of a well cannot imagine the length and breadth of the gigantic ocean. Such a frog, when informed of the gigantic length and breadth of the ocean, first of all does not believe that there is such an ocean, and if someone assures him that factually there is such a thing, the frog then begins to measure it by imagination by means of pumping its belly as far as possible, with the result that the tiny abdomen of the frog bursts and the poor frog dies without any experience of the actual ocean. Similarly, the material scientists also want to challenge the inconceivable potency of the Lord by measuring Him with their froglike brains and their scientific achievements, but at the end they simply die unsuccessfully, like the frog.”

When the life of the boy-saint Prahlada was in danger, Lord Vishnu broke open the pillar and exhibited his most amazing and unique form of Lord Narasimha. He killed the demon Hiranyakashipu and protected the life of Prahlada.

Mukundamala Das is a senior monk at ISKCON Chowpatty. He is a prolific writer and revered speaker of vedic philosophy. He is an editor in-charge of BTG (Back-to-godhead) monthly magazine of ISKCON India operations. 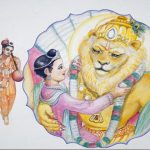 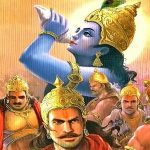